The garden has peaked and bloomed it was a spectacular season. Looking forward to the 2023 Bloom Season thank you for your support.

History of the Gardens

The Rainbow on the Hill 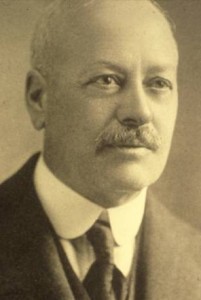 The history of the Presby Memorial Iris Gardens is one that is deeply entrenched in the history of its community, Montclair, New Jersey.

The Gardens were started as a memorial to Frank H. Presby, one of the founders of the American Iris Society and a leading citizen of Montclair. Frank Presby was an iris hybridizer and owned a fine iris collection. It was his expressed wish to give a collection of his favorite flower, the iris, to Montclair’s newly acquired Mountainside Park. Unfortunately, before he could carry out his plans, he passed away in 1924.

Three years later in 1927, Miss Katherine Inness, the first curator of the Montclair Art Museum, acted on behalf of the Montclair Museum Board and presented to the Montclair government the project of establishing an iris garden as a memorial to Mr. Presby. The proposed iris gardens would act not only as place of remembrance, but would also draw in visitors and encourage educational projects such as teaching the care, history, and hybridization of iris. The Presby Memorial Iris Gardens are the result of the collaborative efforts of the Town Council, Parks Commission, the Garden Club of Montclair, and the American Iris Society (A.I.S) under the supervision of the newly formed Citizens Committee led by its Chairperson, Barbara Walther. 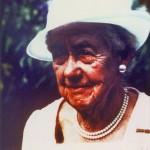 Barbara Walther was a graduate from the University of Chicago with a Botany degree. In 1918 she and her husband Fred purchased the Upper Mountain property next to Mountainside Park. She was a charter member of the Montclair Women’s Club and the Garden Club of Montclair where she gave lectures and wrote a variety of articles. Mr. and Mrs. Walther were also instrumental in preserving the land for Mountainside Park and establishing the Presby Memorial Iris Gardens. She remained a fixture amongst the iris well into her nineties and passed away at ninety-four in 1977, the fiftieth anniversary of The Gardens’ inception.

Listen as Barbara tells how the gardens impacted one young man in 1967.

The first irises were planted at a dedication meeting which included the Citizens Committee members and the Town Commissioners. 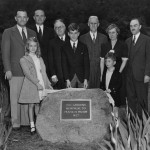 Several hundred supporters arrived, bringing iris plants. Some of the first plants came from Mr. Presby’s own garden as a gift from his children. Other iris plants were donated by the American Iris Society, the Kellogg Gardens, and from Great Britain, Germany, and Japan’s countrymen who were international admirers of the work being done in Montclair. Local contributors included Joseph Van Vleck who donated his Siberica Iris to the Gardens, and A. I. S. President John Wister, who laid out the garden design and helped supervise the planting with Barbara Walther. The town supplied labor and materials for The Gardens and the Citizens Committee became responsible for the management of The Gardens. They were also greatly helped by members of the Garden Club of Montclair who from the beginning gave money to secure new irises each year. Jennie Bonsal was one of the earliest supporters. She used her considerable skills to organize the iris collection into card catalogs. These cards became the basis for the bed books and database that today contain information about each iris variety and its location. 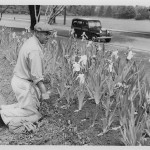 The Gardens are always being improved. A sprinkler system was installed, making easier the care of newly planted beds and lawns. A dry creek bed was restored along the spine of The Gardens, and two handsome bridges were built to cross it. Specimen trees were planted west of the creek bed as well as various grasses around the creek. Siberian, Louisiana and Japanese irises are planted in and on the side of the creek. In 2007, a patio with memorial benches was installed at the entrance to the gardens.

In 2009, Essex County purchased the Walther House and Grounds from the Citizens Committee, saving the gardens from an uncertain future. 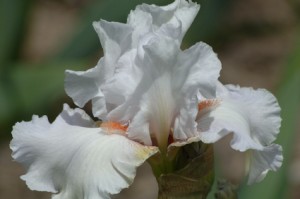 The Citizens Committee leases the house and grounds and continues to fund raise the cost of operating the gardens.

Also in the summer of 2009, two alumna board members helped our staff divide and replant Presby Honors September at the Essex County September 11, 2001 Memorial at Eagle Rock Reservation which overlooks the New York City skyline.